Already Gotten a Discharge in a Chapter 7 Bankruptcy, But Now Face Foreclosure on Your Home? You May Still Be Able to Save It!

Lots of people file a chapter 7 bankruptcy in New Jersey to get rid of credit card and medical debt because trying to pay them resulted in their getting behind in their mortgage payments! But months after getting their discharge in chapter 7, and getting out from under their other debt, they still find themselves behind on that mortgage.

But what happens if, a year or two later, things change, and they are able to get current in a chapter 13 plan?  Assuming the mortgage company has not already gone to sheriff sale, is there anything that can be done to save the home?  Luckily, there is!

A Chapter 13 Bankruptcy Can Still Save Your Home!

In October of 2011, a bankruptcy judge in Newark ruled that, under certain circumstances, people can file a chapter 7, discharge their credit card debt, and then later file a chapter 13 to hold off a foreclosure by paying into a plan to bring the loan current!

Colloquially called a "Chapter 20" (a chapter 7 followed by a chapter 13), this has been around for a long time, but the question has been whether this can still be done after the changes to the law in 2005.  The judge said that this can be done as long as:

But What If There is a Second Mortgage?

In that instance, the debtor can use the chapter 13 to remove the second mortgage!

This is an option available where if a debtor completes a plan, the second mortgage can be removed permanently, leaving the homeowner with only one mortgage payment instead of two! It's called a mortgage "strip off" and can turn that second mortgage holder into an unsecured creditor that is paid a percentage (or maybe nothing) in the plan after the first mortgage is brought current.

If you are a New Jersey homeowner trying to get current on a mortgage and save a home even after having filed a chapter 7 bankruptcy, and needs to file bankruptcy, call me right away at 856-432-4113 or contact me through this site.

If you have more questions about bankruptcy, then download my free book,Top Questions People Ask About Filing Bankruptcy in New Jersey. 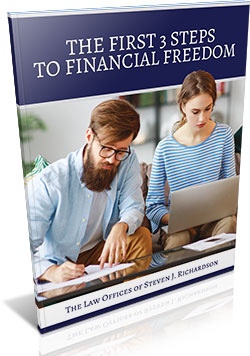 Can't Seem to Get Out of Debt? Stuck in a Financial Hole? Then Get This Free Book and Take the First Three Steps to Financial Freedom!Click Here to Learn More!