Can I go to jail for driving while suspended? 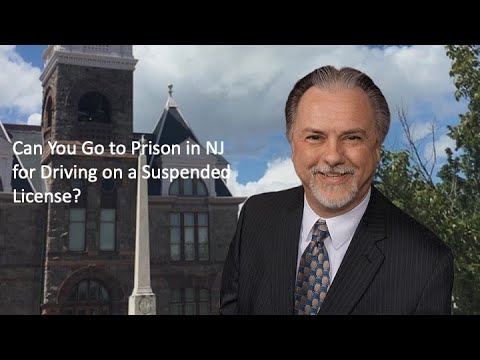 You May End Up Going to Prison for Driving on a Suspended NJ Driver's License!

One of the most insidious charges in the New Jersey traffic code is Driving on a Suspended License. This is because a conviction will stay on your record forever, and the punishments get worse every time they get you!

The fines can be quite a bite out of your bank account, even with a first offense, so that alone is a reason not to get convicted of this charge. The fines go up as follows:

But if you are caught driving while suspended (DWS) for drunk driving, the fines are even worse!

Then You Go to Jail!

So to answer the question, yes, you can go to jail for a Driving While Suspended ticket in New Jersey. There is no incarceration for a first offense not on a DUI suspension, but on a second offense you could get up to 5 days in jail, and on a third or subsequent offense (lifetime!), you get a flat 10 days in jail.

A Vicious Cycle of License Suspensions

The problem with a Driving While Suspended conviction is that it can add an additional suspension of up to 180 days, which would start to run after you complete your current suspension! So not only are you punished for driving on the current suspension, you get another one put on top of it. As you can see, this can easily spiral out of control if you keep getting caught.

If you have been ticketed for driving while suspended in New Jersey, you are facing serious consequences that may be avoidable. You need to get an attorney to represent you and keep things from getting out of control.

So i you got your ticket in Burlington, Camden, Gloucester, Salem or Cumberland County, please call me right away at 856-432-4113 or contact me through this site to schedule an appointment for a free consultation in my Woodbury office. If you are out of state or out of the area, this can be done by phone.