To Convict You of Drunk Driving in New Jersey, They Have to Prove You Intended to Drive! 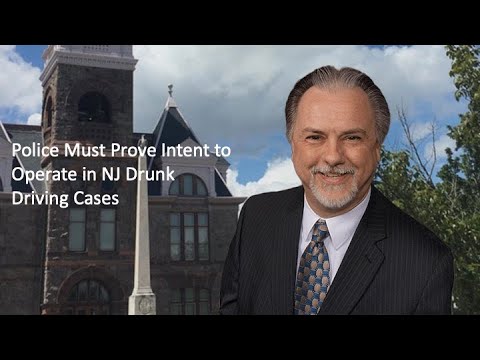 To Convict You, Police Must Prove You Intended to Drive

So you've been drinking in a restaurant or a bar, you leave intoxicated, and get into your car. After starting the engine, you either decide to sleep it off before going home or pass out before you can put the car in gear and move it. The police later approach your car, determine that you're drunk, and arrest you for a DUI. Can they convict you? Not necessarily!

Police Must Prove Operation for a DUI

To be convicted in New Jersey, you must operate a motor vehicle while "impaired" by intoxicating liquor, narcotic, hallucinogenic or habit-producing drug. Absent any admission by the driver, or the defendant being found as the sole occupant of a car found in the roadway, the state must prove this beyond a reasonable doubt.

In most cases, this is rather straightforward. The police officer sees you driving the car, or finds you in the car behind the wheel, on the shoulder of the road, with no one else with you. That is not always the situation, however.

It used to be that if you got into the car, put the keys into the ignition, and started the engine, that was enough. However, the Supreme Court in New Jersey has ruled that the state need more than this. They need to prove an intent to drive, not just start in the engine. It ruled that operation means driving, not just starting the engine.

In that case, the defendant left the bar intoxicated and went to his car. He had started the engine of the vehicle to get the heater working, as he intended to sleep it off. The police found him sitting in the driver's seat with the engine running way past the actual closing of the bar.

The state argued that the fact that the engine was running was enough to prove operation, but the court disagreed. It ruled that in addition to starting the engine, evidence of intent to drive or move the vehicle at the time must appear. The fact that the defendant did not drive the vehicle out of the parking lot in the hours that follow the closing the bar was very telling.

You May Have Defenses to Your NJ DUI!

Operation lack of operation is a common defense in New Jersey drunk driving cases. You should never assume that the police have you dead to rights. You should consult with an experience do you why attorney to determine whether you have any defenses.

If you have been charged with drunk driving in Burlington, Camden, Gloucester, Salem or Cumberland County, have decided that you need to hire an attorney and are ready to take action, call my office immediately at 856-432-4113 to schedule an appointment for a consultation. You may be able to assert defenses that will prevent you from facing the serious consequences of a DUI conviction in New Jersey.